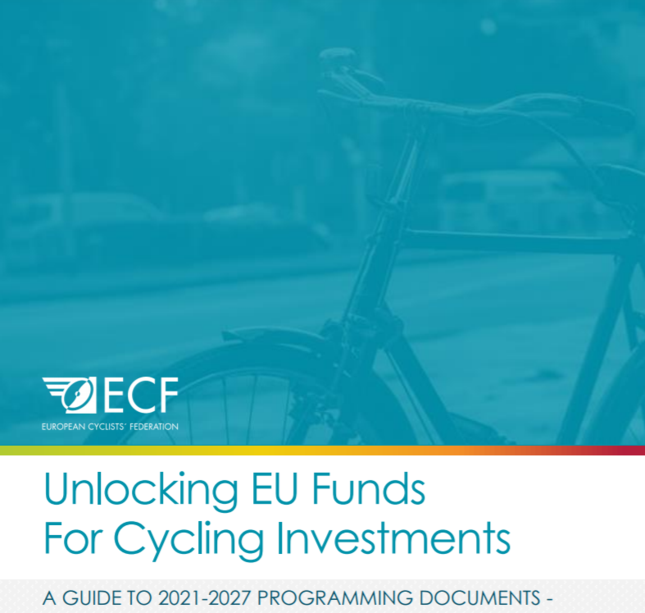 The European Cyclists’ Federation has prepared a guide to support authorities responsible for drafting programming documents and citizens interested in dynamic and sustainable development of their regions on their way to obtaining substantial European funding for excellent and beneficial cycling investments.

“In the 2007-2013 Multiannual Financial Framework (MFF), approximately EUR 700 million was allocated to cycling. This was only 1% of the EU’s total spending on transport measures during that period. During the 2014-2020 MFF, the EU has invested almost three times this amount, about 2 billion EUR, in walking and cycling projects. As much as this increase is very welcome, it still makes only a small fraction of the total transport budget. That is why we want this number to triple again and unlock investments of 6 billion EUR in the next 2021–2027 MFF.” This is reported in the introduction of the guide produced by the European Cyclists’ Federation - ECF.

The ECF is the umbrella federation for national cycling organisations (organisations that promote bicycle use in the context of mobility) throughout Europe. With 69 members across more than 40 countries, the ECF unites cyclists’ associations giving them a voice on the European and international level.

The ECF believes that investing in cycling transport and tourism is the best way to achieve the need to protect citizens’ health, due to the crisis of the COVID-19 pandemic, and to pursue the Green Deal objectives, also triggering the economic growth of regions.

Chapter by chapter, the guide outlines the significance of cycling in the new budget perspective and reviews the general benefits from cycle-related investments. It discusses the importance of cycling for the implementation of the European Commission’s country-specific recommendations and for fulfilling the obligations of the National Climate and Energy Plans, and shows an analysis of the external costs of motorized transport as presented in the 2020 European Semester country reports.

Besides, the guide describes how the EU regulations translate to specific investments and provides the collection of inspiring investments funded through ERDF. The guide collects and presents a selection of good practice provisions included in programming documents of the European countries who succeeded in obtaining significant amounts of European funds for cycling investments in the 2014–2020 financial period.

You can find the guide Country-based and further useful information, at the European Cyclists’ Federation website here.