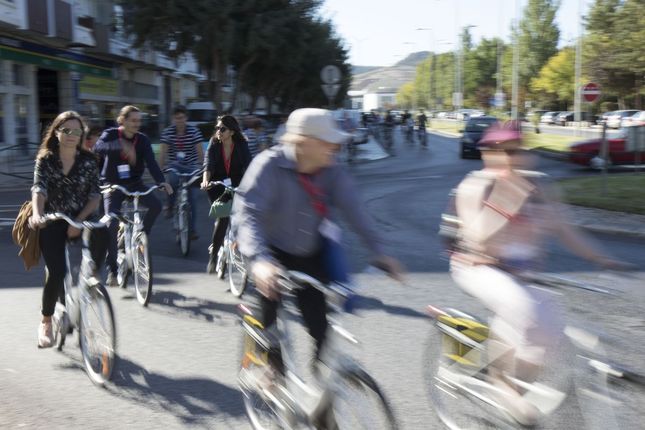 The Urban Transports Community attended the CIVITAS Forum in Torres Vedras to network and present its projects.

Rome, 16 November 2017, (GoSump) – The urgent need of easing the flows of tourists, residents and goods in tourist destinations in Mediterranean cities in order to preserve their historical heritage and social cohesion was the main issue addressed by the Urban Transports Community during the 15th CIVITAS Forum, Torres Vedras, Portugal, 27-29 September 2017.

This Forum is one of the largest European conferences on urban mobility and transport and this year edition was focusing on “Small Communities, Big Ideas”. Our Community, which comprises six Interreg MED-funded projects on low carbon economy and urban transports, seized this opportunity to set up a stand where to showcase our pilot actions in port cities, tourist destinations and islands in the Mediterranean area. At the same time our community members have benefited a lot from the exchanges of ideas and best practices with more than 500 participants of the Forum, they have had also the opportunity to discover innovative transport solutions being developed and deployed first-hand, and to learn from peers and experts working in the field.

The six projects of the Urban Transports Community (CAMP-sUmp, LOCATIONS, MOBILITAS, MOTIVATE, REMEDIO, SUMPORT) are joining forces to promote strategies and plans towards a more sustainable urban mobility, and their common actions are facilitated by the Interreg MED-funded project GoSump. Just before the Forum, our partners, projects representatives and experts have met in Torres Vedras for a community building meeting, where they have worked together on key issues: tourist destinations (attended by LOCATIONS, MOBILITAS and MOTIVATE), specific sub-areas of trip generation/attraction (attended by CAMP-sUmp, LOCATIONS, REMEDIO and SUMPORT), participatory planning and processes (attended by MOTIVATE, LOCATIONS and REMEDIO), ICT - Information and Communications Technologies (attended by all modular projects) and low carbon transport modes/services (attended by MOBILITAS, MOTIVATE, REMEDIO and SUMPORT).