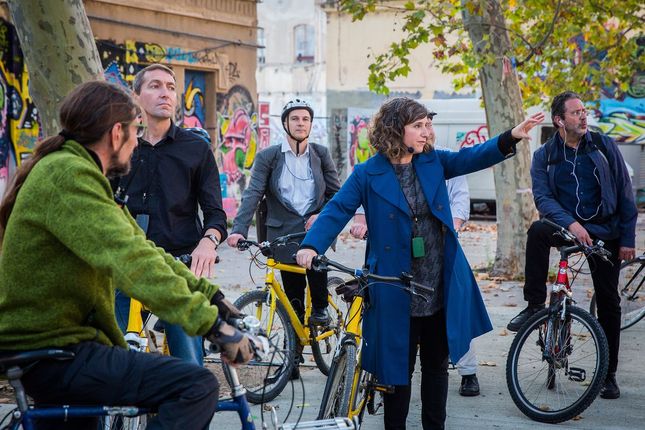 A two-days event of the MED Urban Transports Community took place in Barcelona on 12 and 13 November 2018, with a series of activities, including conferences, meetings and technical visits. The event hosted stakeholders involved at local, regional or national level, politics, universities, businesses, industry and NGOs, and representatives from other Interreg MED communities, to explore tendencies and evaluate the mid-term results of the MED Urban Transports Community featured projects.

(Rome, 17 DEC 2018) In the city of Barcelona (Spain) the “superblock” model has been set for the first time in Poblenou neighbourhood in 2016. This new conceptual model of mobility management could represent a good solution for other urban contexts, connecting together different issues as urban transports, sustainable mobility, energy efficiency in buildings and renewable energies.

The superblock model is a growing tendency, which has won prizes for innovation of the habitative urban spaces and management of urban mobility, and is particularly recommended for those cities that are not able to reduce 100% the carbon emission but need gradual solutions to phase it out.

The study visit of the MED Urban Transports Community to Poblenou superblock was the conclusion of a the two-days meeting, held on the 12-13 November 2018. The field visit was part of the event organized by GO SUMP project together with SMART MR Project (Interreg Europe), that brought together members of the MED Urban Transports Community with the some representatives of the MED Efficient Buildings and Renewable Energy Communities.

The superblock of Poblenou, a grid of quadricules measuring about 400*400 mts, incorporates regular blocks with an “interior” and an “exterior”. The interior component has a reduced speed of max 10 km/h (in other cases can be completely closed to morìtorized traffic) and gives preference to pedestrians. Some inner streets are generally reserved for residential traffic, services, emergency vehicles, and loading/unloading vehicles under special circumstances while the exterior, namely the perimeter, is for motorized traffic.

During the field visit, the Urban Transports Community had the possibility to learn about a model, designed by BCNEcologia- Agencia de Ecologia Urbana de Barcelona, which is very easy to implement but not exempt from doubts of residents. If not appropriately involved in the decisional process, inhabitants can react in negative ways towards the superblock as it seems to be limiting “their spaces”. An element that was already emphasized during the welcome speech of the main conference of the mid-term event of the Urban Transports Community. Both Mr. Antoni Poveda, from AMB -Àrea Metropolitana Barcelona and Mr. Carlos Sanchez Pacheco, from Malaga City Council -lead partner in the GO SUMP MED project, highlighted the need to foster the active participation of everyone in order to achieve a concrete change.

The main MED Urban Transports Commuity conference on the 12 November, hosted Mr. Georgios Kremlis (honorary Director at DG ENV, European Commission). The keynote speaker stressed on the concepts of circularity of the economy and the seek for sustainable development. Rephrasing Mr. kremlis “Circular economy is a priority and it will be even more, that is why the tendency at EU level is to keep investing in programmes like Interreg or Horizon 2020”. The workshop sessions following the panels analysed the transferability of the results of some projects, in light of the conference messages.

Mrs. Silvia Casorran, from AMB, while guiding the visit in Poblenou, remarked how superblocks can be a possible answer to the five city life challenges that she had brought to the attention of the audience during her panel presentation: Liveability, Safety, Health, Accessibility and Efficiency.

The mid-term meeting has been an occasion for the Urban Transport Community to explore new tendencies, by the speech of experts and with practical visits, including an international conference at the Barcelona Smart City Expo World Congress, on the Expo opening day, the 13 November 2018 at FIRA Barcelona.

If you wish to be always updated follow our channels: