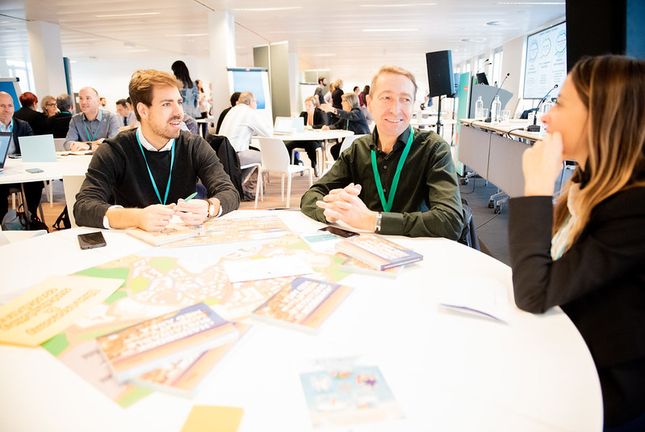 The Urban Transports Community took part in the Interreg MED Piazza in the framework of the European Week of Regions and Cities 2019, on the 9th of October 2019.

(Rome, 24 October 2019) “An integral low carbon planning should be applied in both rural and urban areas, paying attention to the connections between them” highlighted a fictional parliamentary group during the civil parliament session of the Interreg Med Piazza, in which the Urban Transports Community (UTC) took part.

Organized in the framework of the European Week of Regions and Cities 2019 (EWRC), this participatory laboratory interactive session was animated by the Interreg MED Communities and featured the presence of the UTC and its modular projects, working towards achieving tailor-made sustainable urban mobility plans and solutions in the Mediterranean area.

The aim of the session was to focus on MED Communities’ results in addressing relevant concerns in the Mediterranean. The participatory lab made participants experience the Interreg MED Communities multi-stakeholders and holistic approach through 3 main corners:

During the Civic Parliament session, participants were called to elaborate a list of priorities regarding Climate Emergency in MED area, something to which the UTC actively contribute through its modular projects such as MOBILITAS aiming at a mobility for nearly-zero CO2 in Mediterranean tourism destinations. The civic parliament was organized in a way to mirror the presence of parliamentary groups.

Notably, the “Innovation Party”, facilitated by Mrs. Boni from Eurocities, partner of the Urban Transports Community highlighted the “huge gap between “inventors “and “implementers” of the innovation” and encouraged legislative reforms to “be implemented to enable public authorities to use the already existing innovation and spread as broadly as possible.” The Urban Transports Community works towards this aim with modular projects such as REMEDIO, aiming at regenerating mixed-use Mediterranean urban communities congested by traffic through innovative low carbon mobility solutions.

On the occasion of this civic parliament, the “low carbon economy party” pointed out to the fact that “an integral low carbon planning should be applied both in the rural and the urban areas, paying attention to the connections between them. Such territorial planning should avoid land consumption and should improve the sustainable management of the suburban areas.” Finding low carbon mobility solutions is for example, one of the aim of the ENERNET-Mob project, part of the UTC, which aims at creating Mediterranean Interregional Electromobility Networks for intermodal and interurban low carbon transport systems.

During the Bar Terrace, participants learned the main results achieved by MED Communities, experienced through playing the problems and solutions, and discussed on how to raise citizens awareness on various topics such as green and blue economy and the energy transition. Within the UTC, the MOTIVATE modular project precisely aim at involving citizens in such issues, by promoting citizens' active involvement in the development of sustainable travel plans in Mediterranean cities with seasonal demand.

During the Lego Serious Play activity, participants were invited to build and give practical life to some concepts, essential in the Mediterranean context. Interestingly for the UTC was the modelling of the concepts of social and territorial innovation as well as low carbon cities, particularly important in the work of the Community’s modular projects.

Overall, this participatory lab offered the experience of a holistic and multi-stakeholder policy making process through the participation in interactive activities. The lab took inspiration from Interreg MED Communities’ experiences, where almost 900 public and private organisations from 13 Euro-Mediterranean countries join forces in territorial cooperation, offering the great opportunity to enable regions & cities to play the key role they deserve in shaping and implementing innovative policies for a greener and smarter future.

Have a look at the photo gallery here.