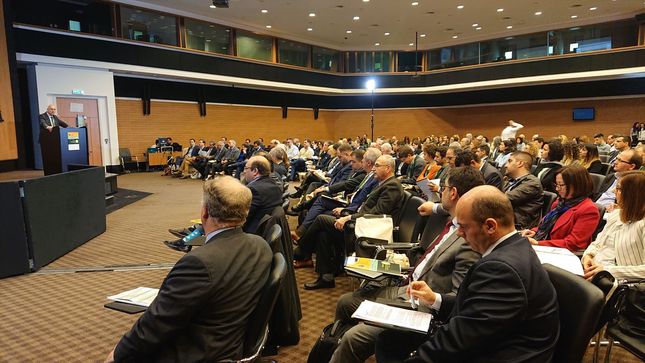 A holistic approach encompassing circular economy, mobility and islands has been promoted in a conference in Nicosia, Cyprus, on 28-29 March, co-organised by the MED Urban Transports Community, whose Tech Camp on ICT Tools took place the day before.

(Rome, 9 May 2019) “We need to build specific synergies, we share the Mediterranean and the same issues and challenges of the key sectors of sustainability. The circular economy is a new business model on which we need to focus, it is an important thematic priority” stated Mrs Hatziyianni, Director of Environment and Spatial Planning at the Region of Crete, Greece, on the occasion of the International Conference CirClE2019 "Challenges for the Islands in the era of the Circular Economy" and SMile 2019 “6th Sustainable Mobility and Intelligent Transport Conference”. This event was organized by the Ministry of Transport Communications and Work of Cyprus under the auspices of the Directorate-General for Environment (DGENV) and the Directorate-General for Mobility and Transport (DGMOVE). It was held in Nicosia, Cyprus, on the 28-29 March 2019, that hosted as well the UTC for its ICT Tools Tech Camp.

Mr Kadis - Minister of Agriculture, Rural Development and Environment of Cyprus - urged the need to move from a circular to a neutral economy, to reduce the negative impacts of the urban exchanges on the environment and on the safety of road users. The same message was highlighted by Mr Nikolaides, Mayor of Limassol, Cyprus, who pointed out to the problematic increasing use of private cars and its multiple impacts on the society and the environment. Most notably he underlined the strategic role public authorities should play in pulling together isolated efforts by developing a strategic plan, as well as in promoting a cultural change by combining the need of citizens to move and to protect our environment. An alternative solution could be found in the Bicycle culture of the city of Trikala in Greece, which was given as an example as well as the Elviten project which incorporates light electrified vehicles for urban transportation within the city. In other words, to replace cars, “social status is about having a good bicycle” joked Mr Papastergiou, the mayor of the city.

On this same line, the main message of Mr Kremlis, President of the Organizing Committee Circle 2019, Honorary Director, European Commission was to promote the link between circular economy and the islands, because insularity has a lot of specificities. “Islands have the handicap of being far from the internal market of the EU, not being able to generate an economy of scale. They are more vulnerable to climate change and suffer from seasonality of touristic waves” he said by encouraging the circular approach.

On a wider territorial level than the insular one, the statement of Mr Carlos Sanchez, from the Malaga City Council, Spain, lead partner of the GOSUMP horizontal project of the Urban transports Community, which co-organised the conference to reinforce the constructive dialogue between the seven territorial cooperation projects of the Community and Mediterranean stakeholders. He stressed the need to change the way we use transportations and how we use the energy, especially when “tourism represents 10% of the GDP but also 8% of the greenhouse gases emissions”.

Based on the principles of the new circular economy framework and the EU Mobility Policy Framework, the conference was focused on building capacity towards transferability and regional cooperation in topics. The EU islands' circular economy challenges and opportunities, the clean energy islands initiative, Renewable Energy Sources, Water resources management, Waste management and plastics' strategy, Clean transport and urban transport are some of the examples presented during the event that featured different panels and several parallel sessions, representing multiple occasions to raise the interconnectedness of circular economy, mobility and islands specificities.

The MED Urban Transports Community is one of the thematic communities of the EU Interreg MED Programme. The Community currently gathers seven territorial cooperation projects and 78 organisations in the Euro-Mediterranean region working towards achieving tailor-made sustainable urban mobility plans and solutions in the Mediterranean area. The MED Urban Transports Community is supported and animated by the GO SUMP project.

The GO SUMP partnership is composed of Malaga Council, RDA Green Karst, EUROCITIES, BIC Euronova, MEDCITIES, CODATU and UNIMED – Mediterranean Universities Union, which aims at improving the visibility and the communication reach of the projects of the community, to create synergies among them and to capitalise and mainstream their results. Using a bottom-up and a top-down approach among the Community projects and relevant policy-makers and interest groups, GO SUMP acts as a bridge enhancing dialogue, promoting the transfer of knowledge and amplifying the impact of the projects of the community.